Safran Seats GB—formerly an arm of Zodiac Aerospace—is undergoing a total transformation of their supply chain operations. In 2018, we explored the results of their IT and implementation process with LeanDNA, which smoothly laid the foundation of collaboration and visibility for future improvements to their operations. 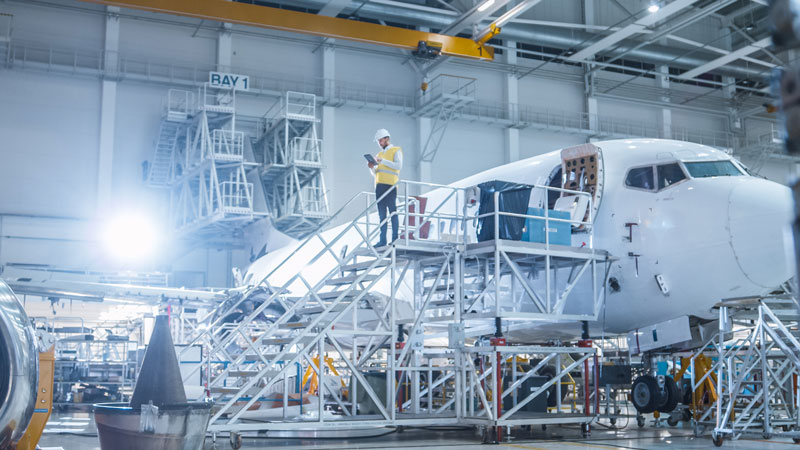 Safran’s partnership with LeanDNA then went on to result in a 36 percent inventory reduction in just three months, the details of which we’ll review in this report. In support of Safran’s renewed management focus on inventory reduction, the LeanDNA team worked closely with Safran executives to identify their challenges and opportunities. LeanDNA then provided Safran with a clear, wide line of sight into high-value inventory action recommendations.

Safran Seats GB produces top-of-the-line business and first-class aircraft seats including the Aura, Optima, and Venus models for airlines and original equipment manufacturers, as well as managing repair and aftermarket inventory. The business has three sites throughout the UK, all of which rely on Baan ERP software to manage manufacturing processes.

Safran Seats GB’s inventory management process was in a goldilocks state: They didn’t have quite enough of the correct parts at the correct time, and had too many of the wrong parts crowding their facilities. They needed a way to identify their just-right inventory—the right amount at precisely the right time—to deliver on time and improve their working capital.

It was a problem LeanDNA sees often in working with large manufacturers: When one piece of stock was in critical shortage at Safran, inventory of other parts continued to grow. Otherwise stated, stock levels increased and excess inventory grew due to a single missing item. Shortages ultimately led to overstock, which challenged their goal of reducing stock while mitigating risk of late delivery times.

Like any complex factory system, this balance is hard to track and repair with an ERP system alone. Carolanne Wilson, Head of Operations Supply at Safran, deduced members on her team spent 10–15 hours per week creating manual reports in Excel spreadsheets—a process that not only deteriorated her buyers’ time but opened inventory processes up to data inaccuracies and human errors.

Due to those data inaccuracies, Laurent Tarnaud, Director of Purchasing for Safran Seats, surmised their inventory data was only 10 percent accurate. With a massive production schedule and customers with quick-changing requirements, it was imperative Safran move quickly to alleviate the tension of late deliveries. Before adopting LeanDNA, they were 3 to 6 months late on deliveries.

Safran buyers were working in many different Excel reports to glean individual insights and decide their next moves. The company lacked a central point for data, workflows, and trends over time. To find their just-right levels for the thousands of active items in their inventory, they needed a way to predict the future and prioritize their daily actions—an impossible task with a fragmented view of quantitative and qualitative data.

The team at Safran explained their ERP system has long been “feeling the test of time.” They tried several workarounds to extend the life of the ERP, including stripping it down to the basics for a fresh start, but the problems persisted. When trying other ways to scale their processes, the team noted those initiatives also “failed spectacularly.” There was just too much data for the ERP and humans alone to process.

LeanDNA was the perfect solution for this organization to renew their focus on inventory management and figure out their just-right inventory processes. The result? Millions of pounds saved in three short months.

“These homegrown shortage reports have served a purpose, but it was painful, time-consuming, inefficient, inaccurate, and there was duplication of efforts. We had people getting data off a supplier, then entering it in three or four places for the different shortage reports. In 2019, to think that people still work like that in an aerospace business is shocking.”

Safran used LeanDNA to automate and standardize their shortage management workflows, which in turn led to a transparent and collaborative operation to manage obsolete stock. Buyers and executives at Safran found the following benefits of LeanDNA empowered their operations:

Collaboration and Prescribed Actions Across Sites
Safran inventory analysts use LeanDNA to look at obsolete stock and collaborate across three different sites (and three different instances of Baan, their ERP system). This allows their team to check cross-site requirements and reveal opportunities for collaboration, even across sites with different ERP systems. For example, Safran reduced waste by transferring obsolete inventory to the aftermarket division for consumption.

Visibility and Incentivization
Visibility is the cornerstone of an agile organization and is the first thing LeanDNA provides a business. Previously at Safran, their lack of visibility into data integrity or inventory opportunities for buyers meant potential value was hidden and inaccuracies were often ignored. From an inventory optimization perspective, LeanDNA gives buyers visibility into not only the types of actions they can take, but also the monetary amount of each potential savings opportunity. This contributes to their ability to solve issues quickly and accurately, while adding a level of incentivization to their workflows.

Continuity of Reports
LeanDNA’s immediate reduction of Excel reporting improves the continuity of reporting when members of the Safran team leave (and take their Excel sheets and knowledge with them). This sets the business up for the future of their inventory management by keeping all data, communication, and actions safe.

“It’s a great analytics tool. It gives you great visibility and puts you in the right direction where you need to go. It is intuitive. Everyone’s got different priorities, and creating your own dashboards is very straightforward. One of its strengths is the collaborative functionality.”

Agile, accountable improvements to existing systems and a renewed focus led to a 36% reduction in inventory

In the first three months of using LeanDNA, Safran Seats GB achieved a 36 percent reduction in inventory. The combination of LeanDNA implementation with a renewed management focus on on-time delivery and inventory optimization empowered teams to make swift changes. The swift value is an outcome of the following results from LeanDNA and Safran’s partnership:

Improved Inventory Accuracy and On-Time Delivery
Before LeanDNA, item data inaccuracy was the root cause of tardy delivery—Safran reported they were three to six months late on average. The platform corrected and validated item master data, supplier lead times, bills of materials, and supplier capacities. Any anomalies to these items are now immediately flagged, tagged, and corrected in LeanDNA, so teams can forecast future demands and find their just-right inventory.

Increased Accountability (and Some Friendly Competition)
Buyers at Safran who use LeanDNA daily gamified their day-to-day, according to Wilson. “Previously the buyers didn’t have an appreciation for the financial side,” Wilson said. “And now they do. They’re competing against each other to be the top of the inventory actions metric.” Each action in LeanDNA is prioritized by the amount of value it will bring. Carolanne’s team made reducing inventory into a friendly competition, where buyers compete to see who can save the most money. This added the accountability needed to drive greater results (and admittedly, added a little bit of fun to their workflows, too).

Uncovered Anomalies and Inaccuracies Otherwise Hidden
Where ERPs stop short, LeanDNA picks up by taking collected data to the next level. Relying on the platform’s automated processes instead of homegrown spreadsheets shines a light on any anomalies immediately. LeanDNA surfaces any “weirdness” in Safran’s data and inventory trends, and provides actions and reports to help teams fix them swiftly.

“Working with LeanDNA is helping us find the challenges in the ERP. The ERP system is quite antiquated, and not supported from a platform perspective. We’ve manipulated the system over the years, and now it doesn’t calculate in the same way you’d expect it to. LeanDNA has given us visibility of our data integrity issues and allows us to go fix them. I’m such an advocate, the system is amazing.”

Safran struggled with tracking safety stocks, often forgetting where they placed them. With LeanDNA, executives gained governance and approval processes around the safety stocks.

Empowered Future Success
Life before LeanDNA left Safran with uncertainties of the future due to a lack of visibility and vulnerability to human errors. For example, teams could never be certain about the validity of irregular delivery performance numbers. Collaboration was broken and accidental deletions were a regular occurrence. With LeanDNA, communication is captured, tracked, and visible forever.

Safran’s work with LeanDNA has quickly impacted their inventory reduction goals by providing visibility and actions that weren’t possible with an ERP alone. As they continue to improve their procurement process and sustain the gains over time, LeanDNA will grow with them, empowering their teams to reduce inventory, increase working capital, and improve on-time delivery.

“LeanDNA is a tool that gives visibility. It makes recommendations that a human being wouldn’t make because a human wouldn’t have all the information. I see it being a tool that will eventually drive efficiency. It’s very easy to navigate, and it’s very easy to understand the data. You can drill into the data very easily—it’s very user-friendly.”

Find out what's possible for your business

Set up 15 minutes with one of our inventory optimization experts.
Schedule a Demo

Get a copy of this case study as a printable PDF.

This is an necessary category.

This is an non-necessary category.